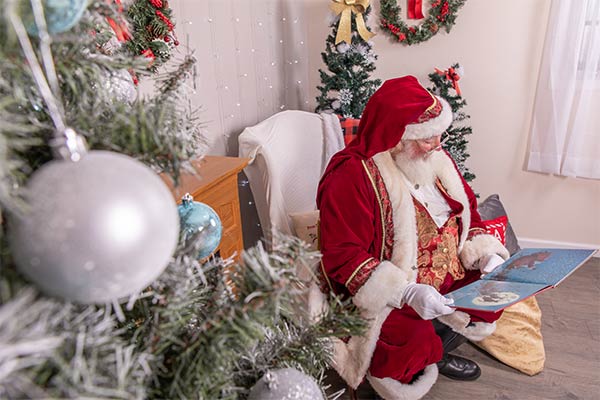 “Tell us about Christmas when you were a girl, Grandma,” Lanetta said in her eight-year-old voice.

“Yeah, Grandma, did Santa bring you lots of presents?” asked nine-year-old Tinker, his big eyes looking up at his grandmother from where he was playing with a truck on the floor.

The questions got seven-year-old Keisha’s attention and she spoke up, “Yeah, did you leave Santa cookies and milk like we do?”

Hearing the words cookies and milk got the attention of five-year-old Nat who was sitting on Grandma’s lap.

“Cookies, Naw-Naw?” Nat asked, bouncing up and down in his grandmother’s lap.

Grandma Ginny gave a look and a nod to ten-year-old Hite who had looked up from his book in the corner of Grandma Ginny’s living room. The look said, “go out to the kitchen and bring some cookies in for your brothers and sisters.” Hite hopped up and ran to where he knew Grandma kept the cookies.

After Hite came back and had passed out cookies to everyone Grandma Ginny started her story.

“When I was a little girl we were very poor. And I had twice as many brothers and sisters as you kids do.”

Lanetta looked at Tinker and Hite because she knew they were already trying to do the math.

“That’s right, Lanetta. You have four brothers and sisters. I had eight—five brothers and three sisters and I was right in the middle.”

Tinker and Hite each gave a look to Lanetta who may have stuck her tongue out at them just a little bit.

One look from grandma and they all stopped it.

“I remember one Christmas Eve. I asked momma if I could leave milk and cookies for Santa Claus. I never knew that kids did that before, but I heard a girl talking about doing just that very thing in school that day.”

Grandma shifted Nat on her lap. The cookie had made him tired and his head was bobbing as he tried to stay awake.

“Only we never had regular milk. It was too expensive for us. We only had instant milk. Do you know what that is, kids?”

“No,” they all said, except for Nat who was snoring quietly on grandma’s lap.

“It’s powder that comes in a big box and you mix it with water and stir it all up and you have milk.”

“Ewwww,” said Keisha, who often echoed what her sister said.

“Ewwww,” said Nat in his sleep, in a quiet little voice.

They all laughed, even Grandma Ginny, which almost, but not quite, woke Nat up.

“It wasn’t as good as regular milk,” Grandma Ginny said, “but we got used to it. And we never had cookies.”

“So what did you do?” asked Lanetta.

The kids faces all said wow when they heard this.

“Why don’t we leave Santee Claus some milk and an apple, my mom asked. Can we do that, I asked right back.”

The kids were glued to Grandma Ginny’s story now.

“Apples were our cookies back then,” Grandma said. “So I left a nice glass of instant milk for Santa Claus along with a big, red apple and a napkin.”

Grandma Ginny smiled and stopped talking as if the story was over.

The kids were all leaning in now.

Grandma Ginny gave a “shhhh” look with her eyes, because she didn’t want them to wake up Nat. The kids all “shhh-ed” and she continued.

“The next morning I raced to the kitchen and all I saw was an empty glass and the folded up napkin. I unfolded the napkin and the brown stem from the apple fell out.”

“He ate the whole thing, my dad said to me. He was sitting at the kitchen table taking off his boots. He had just come home from working overnight. Wow, I said right back to him.”

“Wow,” said the kids to Grandma. All except for Nat who was still snoring in Grandma’s lap.

“He must’ve really liked it, my dad said to me. Why, I asked him. Because he left you a note.”

“He left you a note,” all the kids said. Except for Nat, of course.

“Yep. He sure did. He wrote it right on the napkin.”

“C’mon, Grandma, tell us about the note,” they all said.

And they all shhhsh-ed again.

“It said Thank you very much for the milk and the apple, Ginny.”

“He knew it came from you?” Lanetta asked.

“Sure, he’s Santa Clause. And then the note said, I like instant milk way more than regular milk.”

“And Mrs. Claus says my belly is getting too big, so thank you for leaving me an apple instead of a cookie.”

The kids erupted. They were so loud that they woke up little Nat.

He rubbed his eyes with his fists and said, “Naw-Naw Ginny, I’m hungry. Can I have an apple?”